Serverless vs Containers: Which One to Consider in 2023? 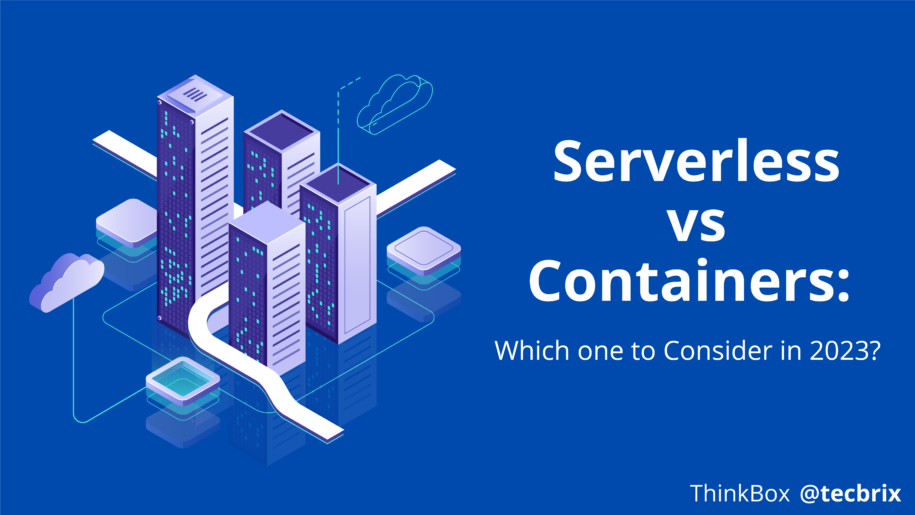 Serverless and containers are emerging technologies that offer advantages over traditional methods, but each has its own niche and limitations.

In this post, we will compare and contrast the Serverless vs Containers and then offer advice about which one should be used for what sort of project in 2023. Let’s get started!

Serverless computing is an architecture style of building applications where the cloud provider handles everything necessary to build and run the application.

The user can focus on designing their application instead of operating the infrastructure that supports it.

It includes servers and networking hardware, an operating system, a package management system, and more.

Containers have been around for a few years and have already made their mark as the next great innovation in how people package, deploy and manage applications.

They work by breaking up an application into many small pieces that can run on any physical or virtual machine.

Essentially they are chunks of code packaged with all the libraries they need to operate so that you can move them easily from one machine to another.

Serverless vs Containers: What are the Similarities?

The truth is, there are a lot of similarities between Serverless vs Containers. They offer developers a way to develop and deploy code on the cloud without thinking about setting up your server or maintaining it.

They provide the full abstraction of the underlying infrastructure. Both allow a developer to focus on their application without having to manage operational overhead or deal with scaling.

Also Read: Automation in DevOps – Level up your Development

Serverless applications scale horizontally using an event-driven architecture; this makes it a good fit when building apps that heavily use server resources in short periods. It also supports running multiple instances of an app on different servers simultaneously.

On the other hand, containerized applications don’t have the same scaling challenges since they ensure one instance takes up all the available CPU power on one machine, allowing them to run even on a single server.

Serverless vs Containers: What are the Differences?

Containers differ from Serverless by being a solution that typically needs someone with an understanding of Linux and needs to be managed on an ongoing basis.

Servers have higher management costs but are more stable. Serverless is cheaper and more scalable but has limitations to which applications you can use for it.

Serverless functions offer dynamic scalability and billing in response to the number of requests (or events) an application requires, whereas containers have the fixed capacity allocated when they start up.

With Serverless, app owners don’t have to worry about allocating these limits upfront, which provides them with more flexibility, on a case-by-case basis, to scale based on needs or availability at any given time.

Furthermore, containers do not handle scaling automatically as serverless does. Instead, it relies on the app owner to set limits for computing resources and then monitor how those resources are being used before reallocating them.

Though containers and Serverless both solve the same problem of how we manage this thing, it is up to you, as the developer or engineer working on a project or software, what technology you should use because each has different strengths and weaknesses depending on your specific scenario.

Serverless environments such as AWS Lambda, Azure Functions, and Google Cloud Functions are built for running code without the need to manage servers.

Containers are hypervisors for virtualizing applications and encapsulating them from the host machine with Docker.

Containers can be run on Linux distribution and in any environment which supports them (including hardware hosts or third-party service providers).

Serverless is one of the most used frameworks for handling cloud-based applications. It was developed to help developers focus on the business logic rather than the servers it runs on.

Containers, on the other hand, are platforms that execute programs without a user interface and do not involve an underlying OS or execution environment like Serverless.

Serverless uses containers to run and provides an orchestration layer to help with scaling and automation.

Both technologies are mature enough and provide different advantages depending on use cases, so companies should weigh their options and choose which solution is best for them based on usage patterns and expectations for growth.

Serverless and containers have programming languages that can be coded in, except for Dockerfile support on Serverless.

In the case of Serverless, options like Python, C#, F#, Ruby, and JavaScript are supported by AWS Lambda.

For container technologies, it is Dockerfile and potentially a future runtime language like Go. When choosing between containers or Serverless, one question is how dependent you want your code to be on the runtime environment.

So among Serverless vs Containers, which type of infrastructure should you choose? Honestly, it depends on your workload.

If you have an application with high demand and need to get it up quickly without having to invest in servers, Serverless may be the answer.

If you need more flexibility or want to save money by managing containers, go with Containers.

Ultimately, both options have pros and cons, but they can still do what is needed for different use cases as long as they are properly managed!